from "Bryan on Scouting"

The BSA asks its members to affirm a belief in God.

That doesn’t mean the Boy Scouts of America tells its members which religion to practice.

It doesn’t mean Scouts and Scouters must attend their faith’s worship services every week; a Scout could practice his faith privately at home, for example.

Here’s what it does mean. I’m quoting the relevant line from the 2014 Guide to Advancement:

Case closed, right? Not in every Scout unit. For example, last month I received this email from a Scouter named Mary:

How do you handle advancement when a Scout says he doesn’t believe in God?

That’s an important question. For the answer, I went to the expert: R. Chip Turner, chairman of the BSA’s Religious Relationships Task Force. Chip is a volunteer and Silver Buffalo Award recipient.

He shares the ways in which the BSA affirms the importance of a belief in God in the following response. It’s lengthy but rich with important information. 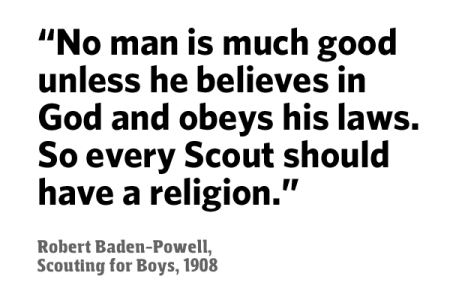 Bryan, thanks for the opportunity to address this very timely question. The shortest answer is that we should help Scouts and their families come to realize that a belief in God is integral to Scouting and is a key element in character building. This does not reflect a change in BSA policy nor does it place Scouters in the role of religious leaders.

By signing the membership application, each leader has already acknowledged the Declaration of Religious Principle which affirms a belief in God, calls for an appreciation for the faith of others, and acknowledges the importance of faith in citizenship development. Moreover, this same Declaration of Religious Principle is now included on the youth application form which is to be signed by the parents. All signatories are also reminded that the BSA is absolutely nonsectarian in its attitude toward that religious training.

Its policy is that the home and organization or group with which the member is connected shall give definite attention to religious life.

“Duty to God” has always been a cornerstone of Scouting. Lord Robert Baden-Powell affirmed this on numerous occasions. B-P once responded to a question about the importance of faith (religion) in Scouting by saying: “Where does religion come in? Well, my reply is … it does not come in at all. It is already there. It is the fundamental factor underlying Scouting and Guiding.”

To further emphasize the importance of faith In American Scouting, early leaders incorporated a 12th point into the Scout Law: “a Scout is reverent.”

As I write this response, my wife and I are on the way home from a vacation which included a return visit to Gilwell in England. While walking on those grounds, I was particularly struck by Gilwell’s designated “Faith Walk” which includes worship sites and support facilities for many of the world religions. Each of these locations is a testimony to the importance of “duty to God” in Scouting. Thousands upon thousands of Scouts from all over the world have worshipped there and, in the process, affirmed this pivotal belief in God.

While Scouting is “absolutely nonsectarian in its attitude toward religious training,” BSA affirms the importance a belief in God in a number of ways. Here is a small sampling:

[As mentioned earlier, it is very important to note that these enhancements do not reflect a change in “duty to God” perspective by BSA. For instance, the faith adventures in theCub Scout program are clearly designed to be carried out in the family with the assistance of their faith group leaders. This affirms the Declaration of Religious Principle.

In Boy Scouts, participants at each review for rank advancement will be asked how they have done their duty to God since achievement of their current rank. It does not put the Scouter in the role of a religious leader nor does it empower this leader to accept answers only from his or her religious perspective. It does, however, provide an opportunity to acknowledge the importance of “duty to God”.

We have all likely heard horror stories of boys being asked in their Eagle Scout board of review about how they have done their “duty to God,” only to have the youth say they don’t believe in God. Equally disappointing is the example I heard of recently of an Eagle Scout who publicly admitted that he simply lied when asked about “duty to God” in his board of review.

Have we not somehow failed such a young person who apparently is not concerned about violating the first and 12th parts of the Scout Law? In my opinion, we have not delivered the full Scouting program if “duty to God” is firstaddressed at an Eagle board.

By the time a young person has achieved the Summit Award inVenturing, he or she will have completed a “structured personal reflection” related to “Adventures of Faith.” In keeping with Scouting being nonsectarian in matters of faith, “a Venturer is not required to share the personal reflection associated with ‘Adventures of Faith’ with his or her Advisor or members of a board of review.”

In other words, Scouting, strongly affirms this fulfillment of “duty to God” while looking to the Venturer’s family and religious leaders to provide faith-specific guidance.

Yes, belief in God is a cornerstone of Scouting. As Scouters, we have a tremendous opportunity to reflect this core principle while helping teach respect for the beliefs of others in pursuit of doing our “duty to God.”

You need to be a member of Mustang Leadership B.S.A. to add comments!